The purpose of the pollinator garden committee is to provide a habitat for pollinators whose populations are decreasing year after year due to habitat loss. Our goal is to fill the garden with the food they need to sustain themselves. We also hope to be an educational resource for those interested in this problem. In addition, we are endeavoring to create a place of peaceful beauty for people to enjoy. Spring through Fall the committee meets every Tuesday at 9 AM to maintain the garden. We welcome new members. Click on any photo to enlarge.

The Garden at Thanksgiving 2021

“The caterpillar does all the work but the butterfly gets all the publicity.”-  George Carlin 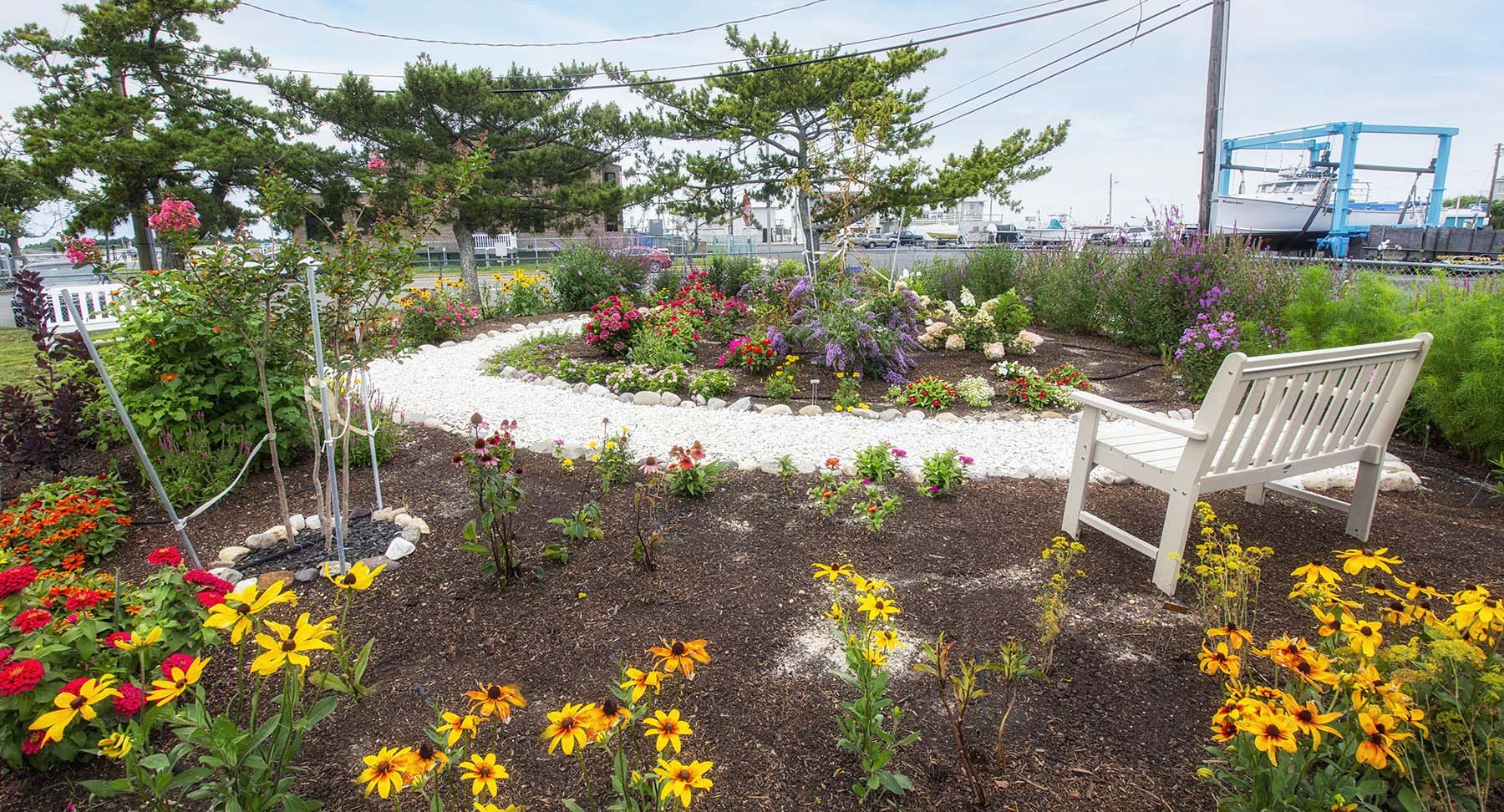 In the Pollinator Garden.

On July 28,2021, the Garden Club held a ribbon cutting ceremony to mark the official opening of our new butterfly/pollinator garden at Bay Breeze Park in Barnegat Light.  On hand were garden club members, the mayor of Barnegat Light, Kirk Larson, several councilmen, and the president of the Barnegat Light Taxpayers’ Association.  Birds and Wildlife committee chair Bonnie Brodman, thanked garden club members and others in the community who donated  their time and labor, plants, benches, and monetary gifts to this effort. All were  indispensable to the creation of the garden.  Michele Farias, president of the Garden Club of Long Beach Island, spoke about how the seed of an idea can, when nurtured, can become a reality. The Garden Club presented  Mayor Larsen with a gift of official ribbon cutting scissors.  The mayor cut the ribbon and the audience was welcomed into the garden. Click on any photo to enlarge and begin a slide show. 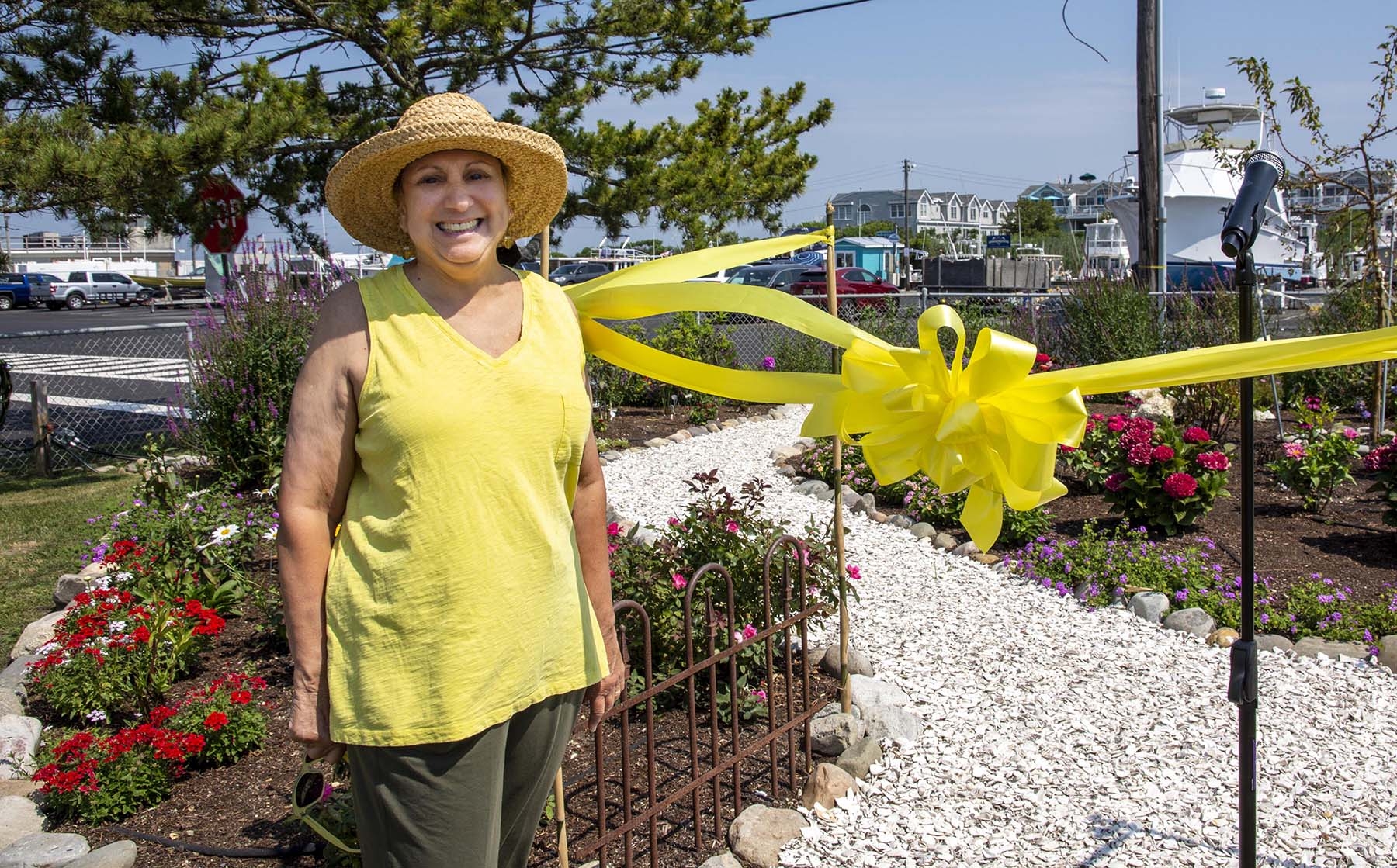 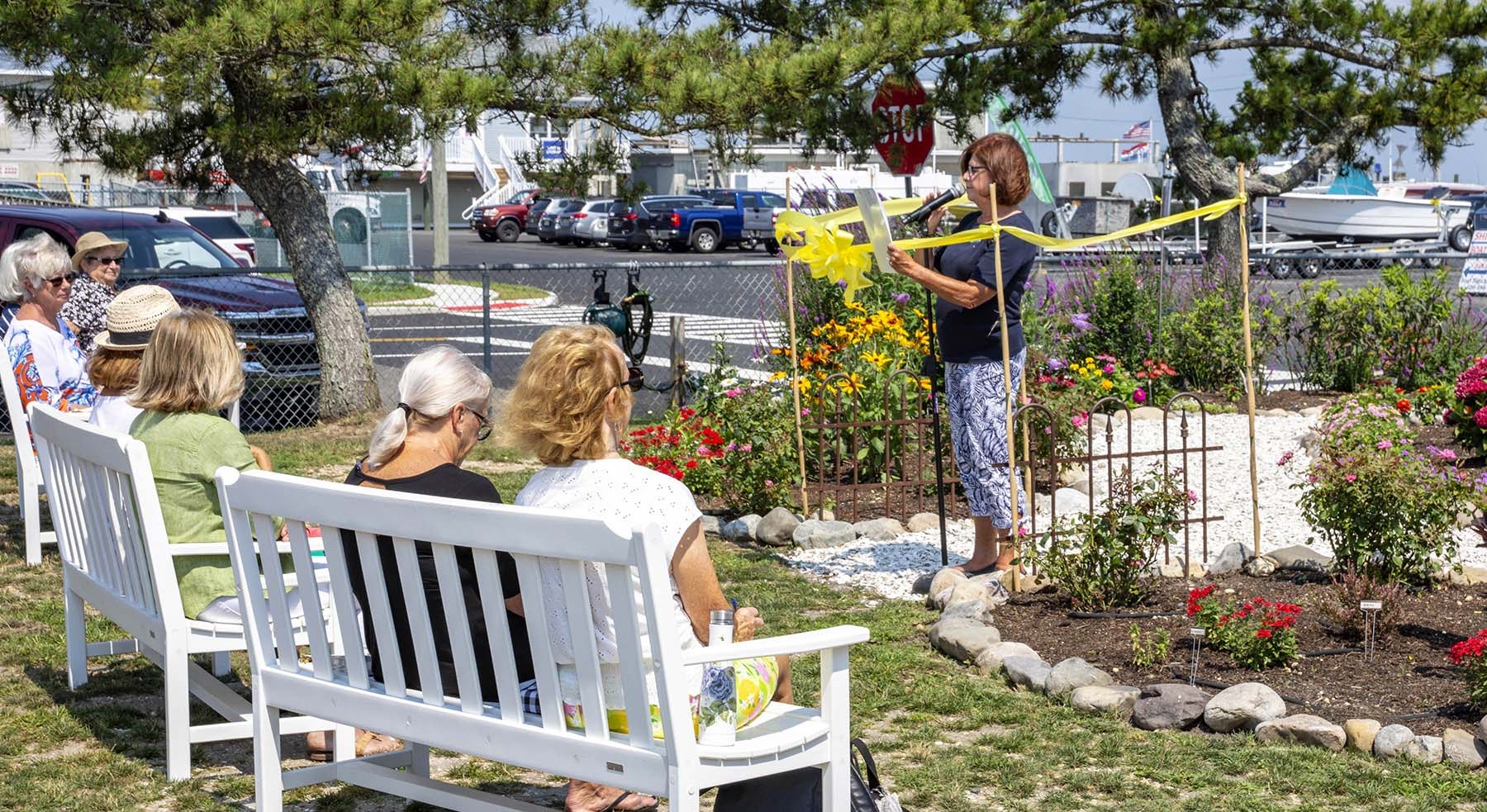 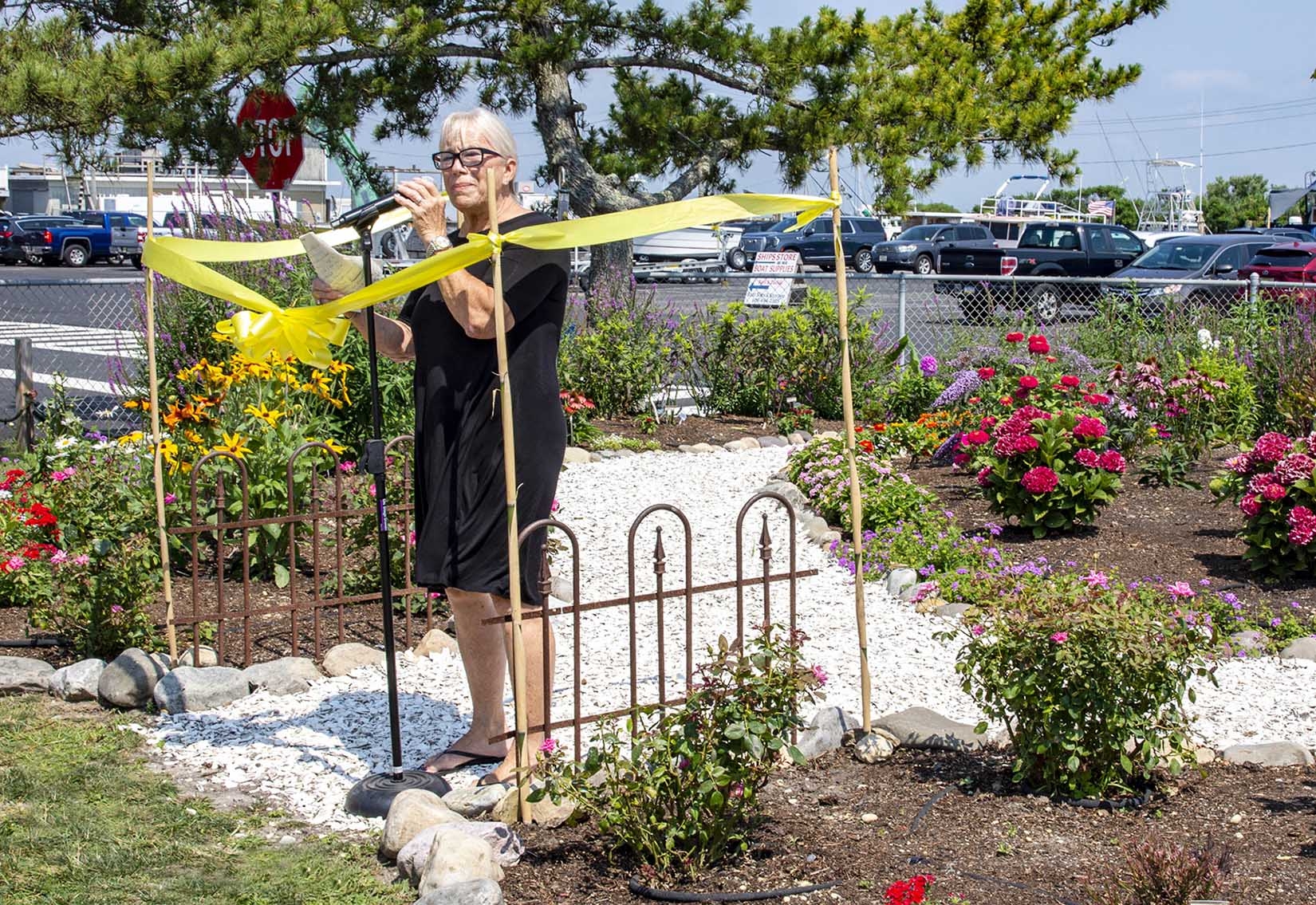 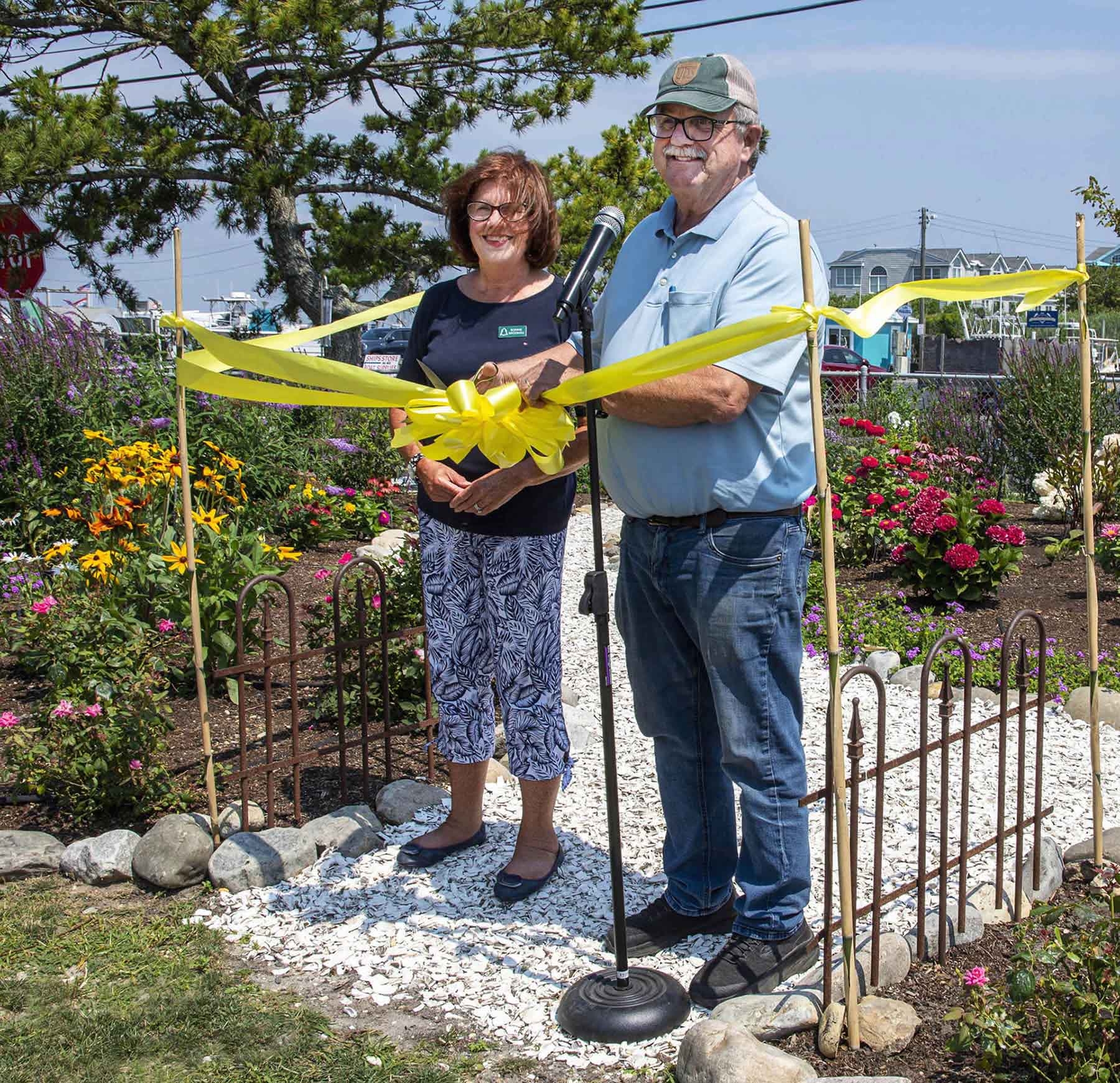 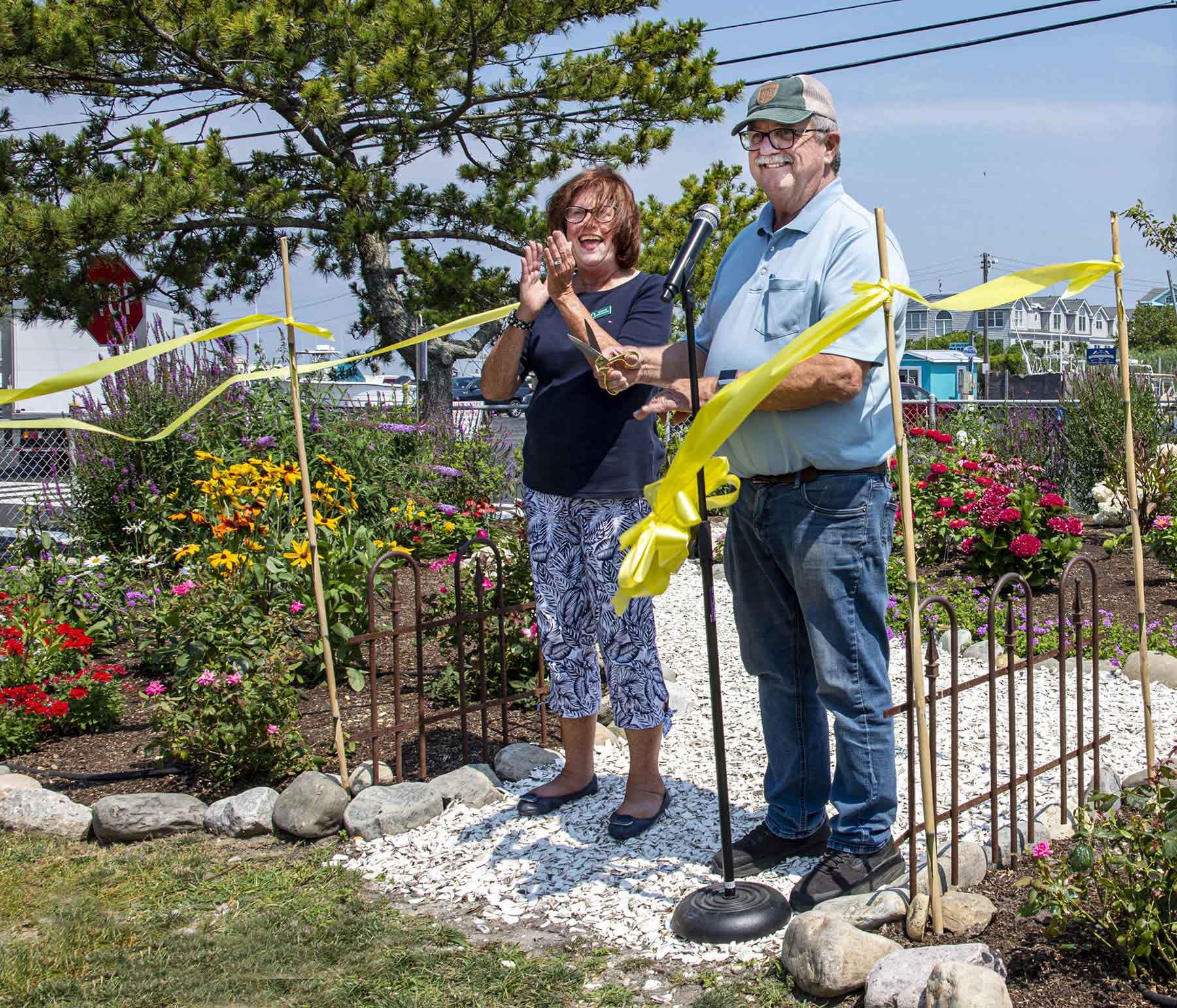 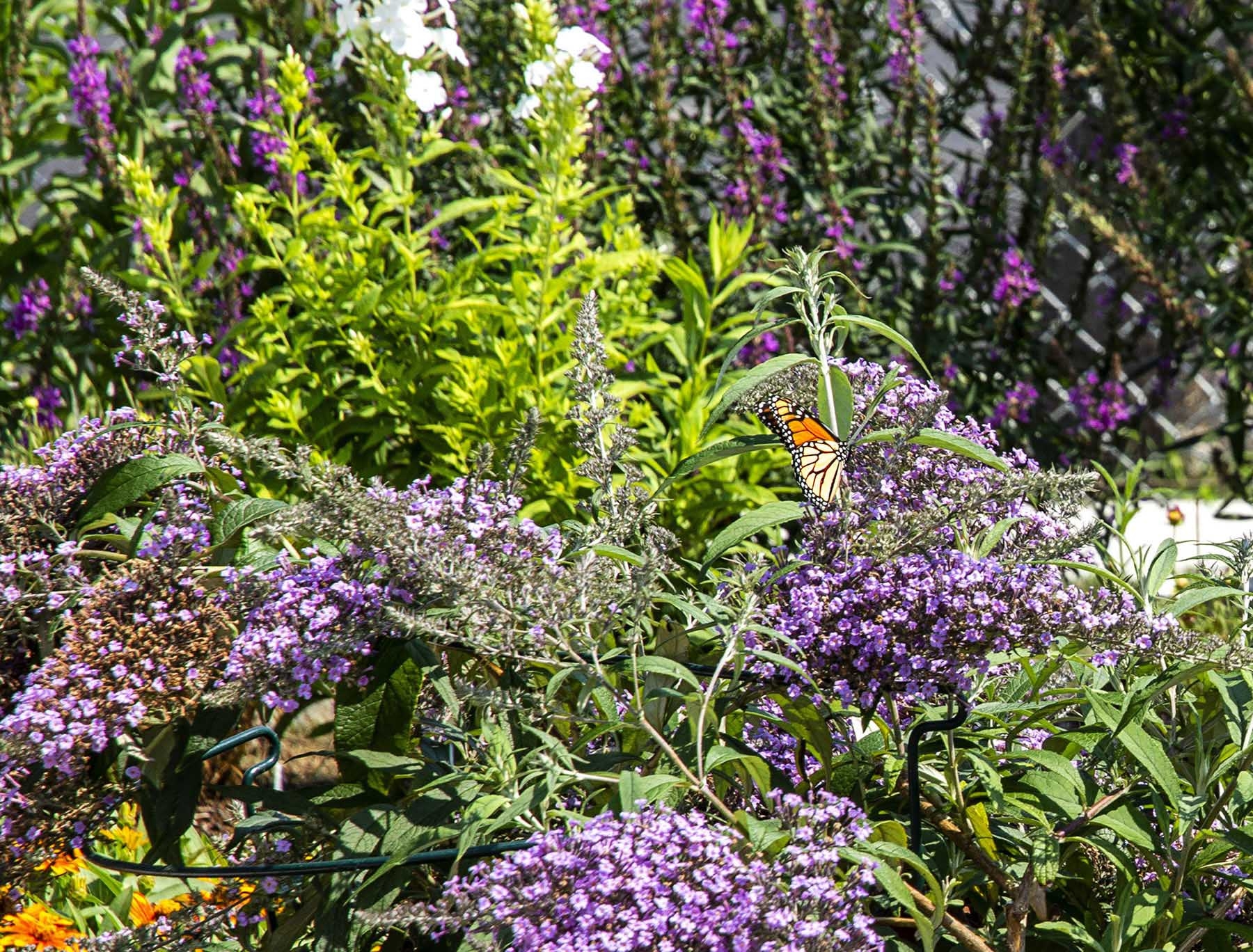 A monarch dropped by for the ceremony. 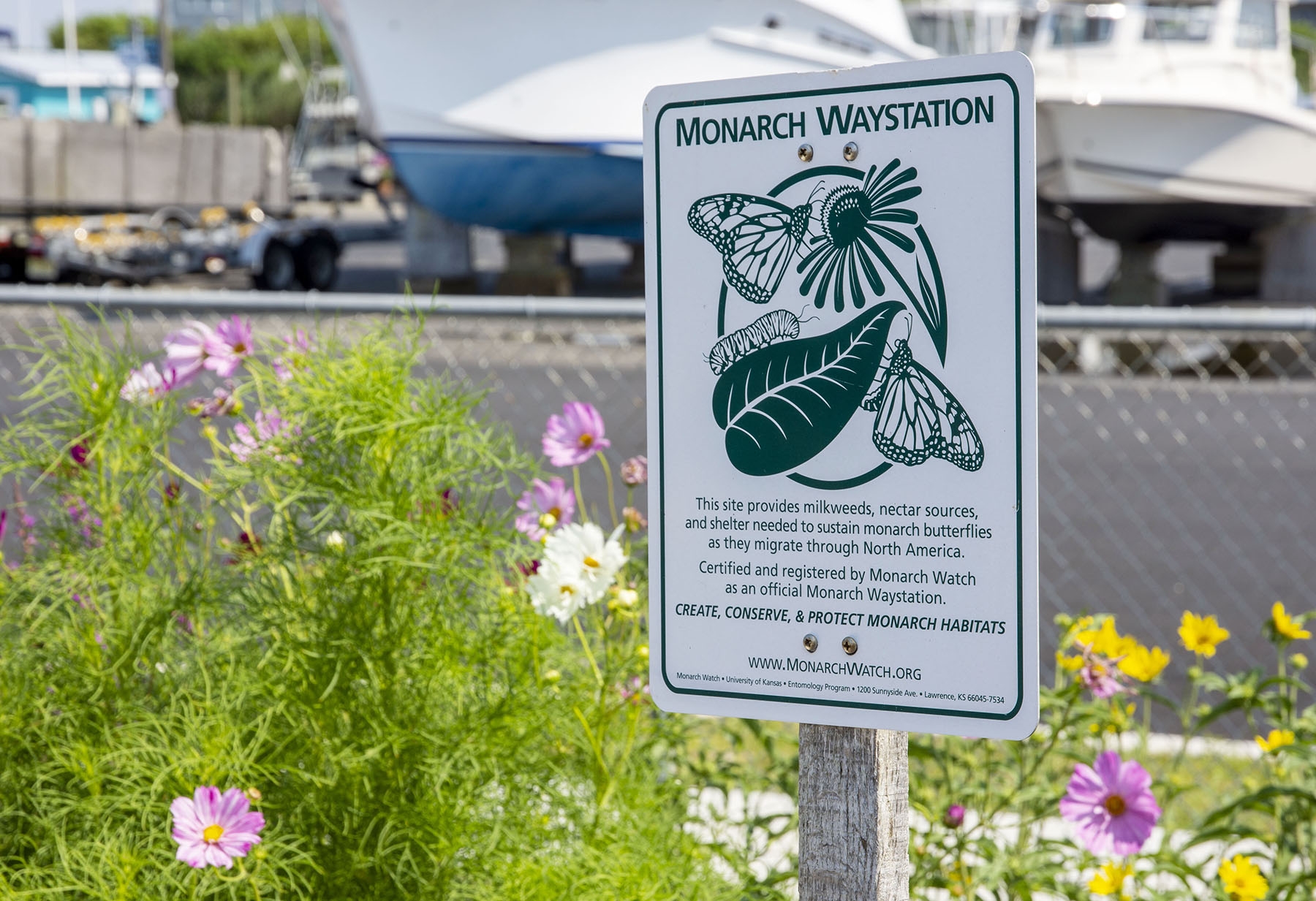 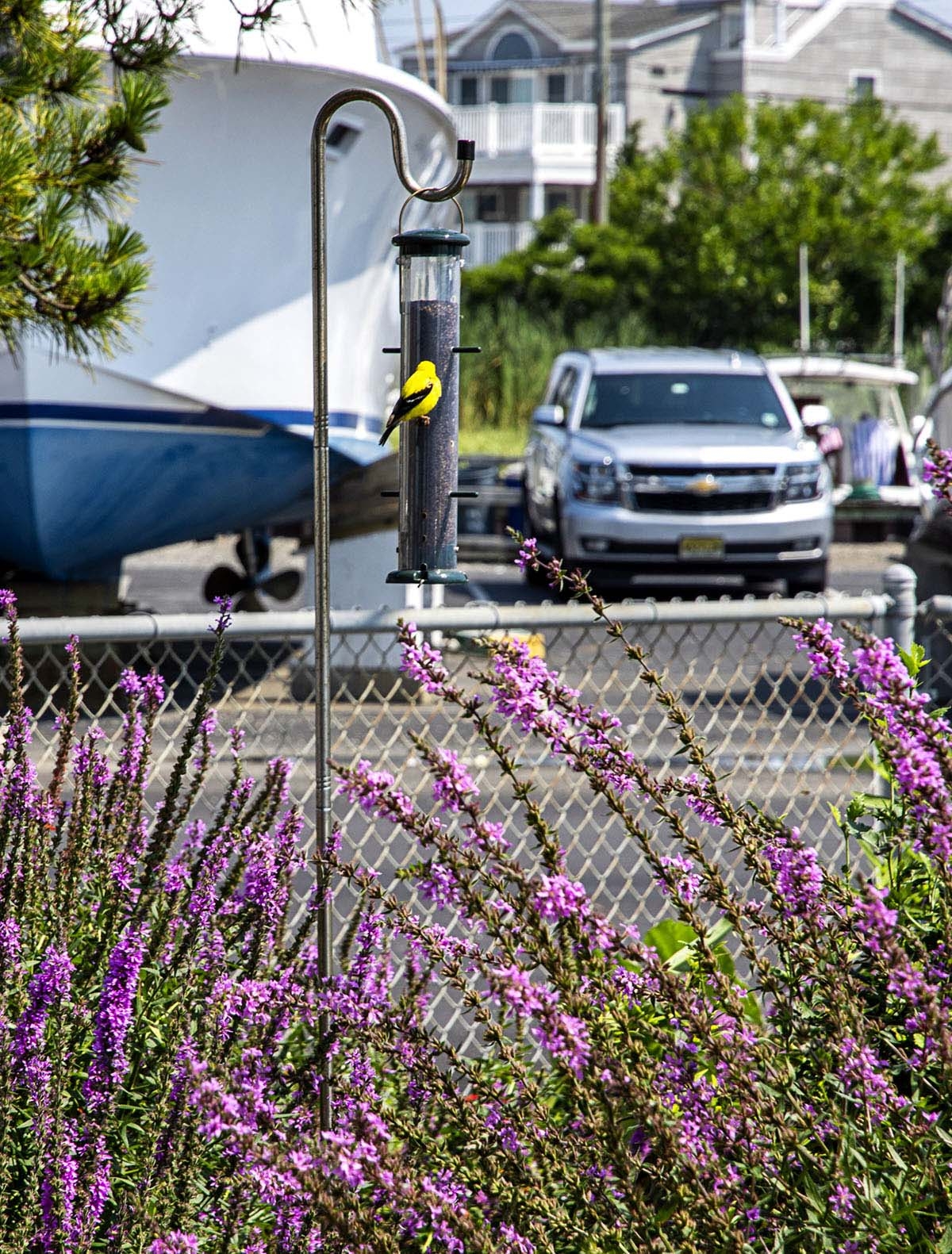 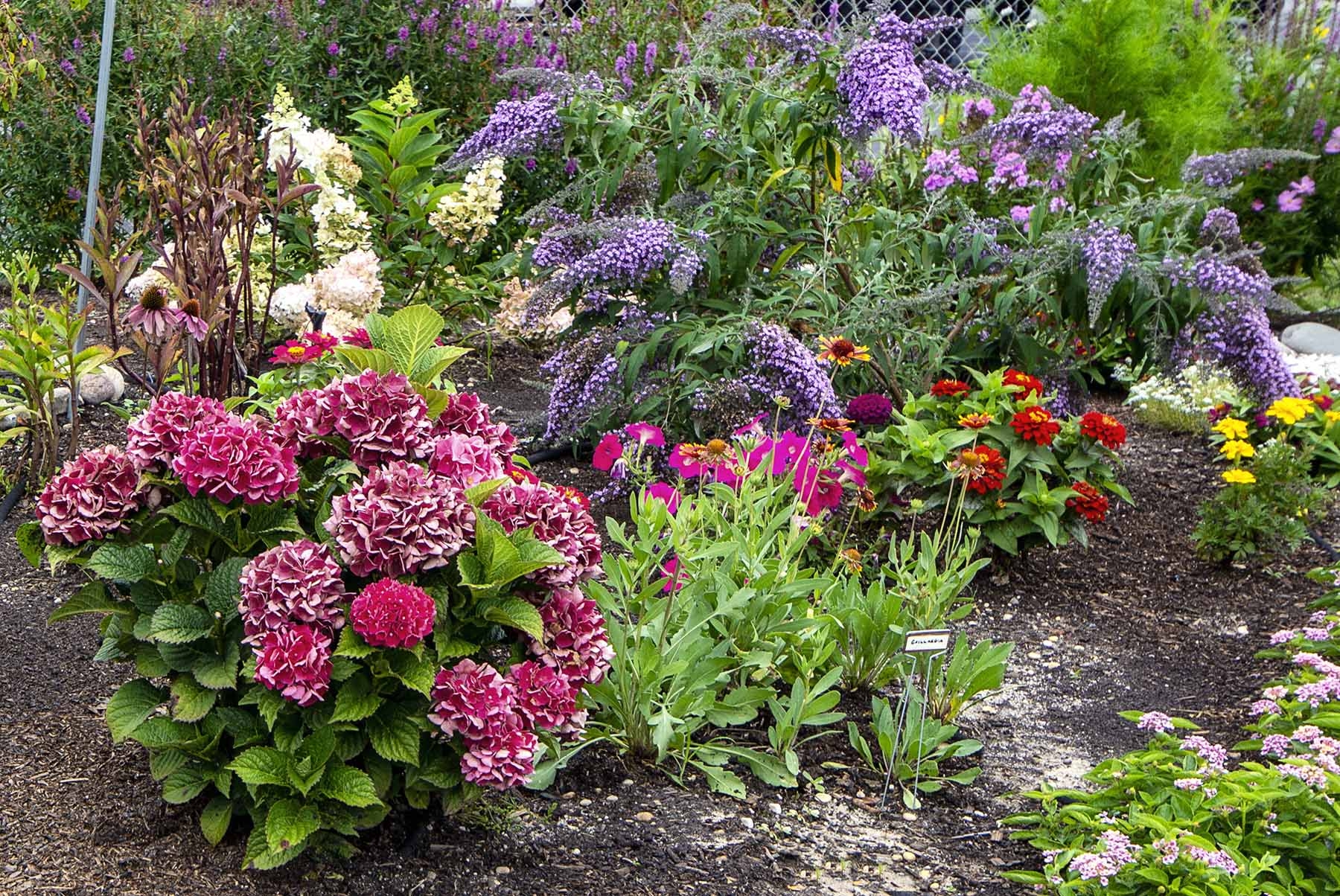 The garden up close. 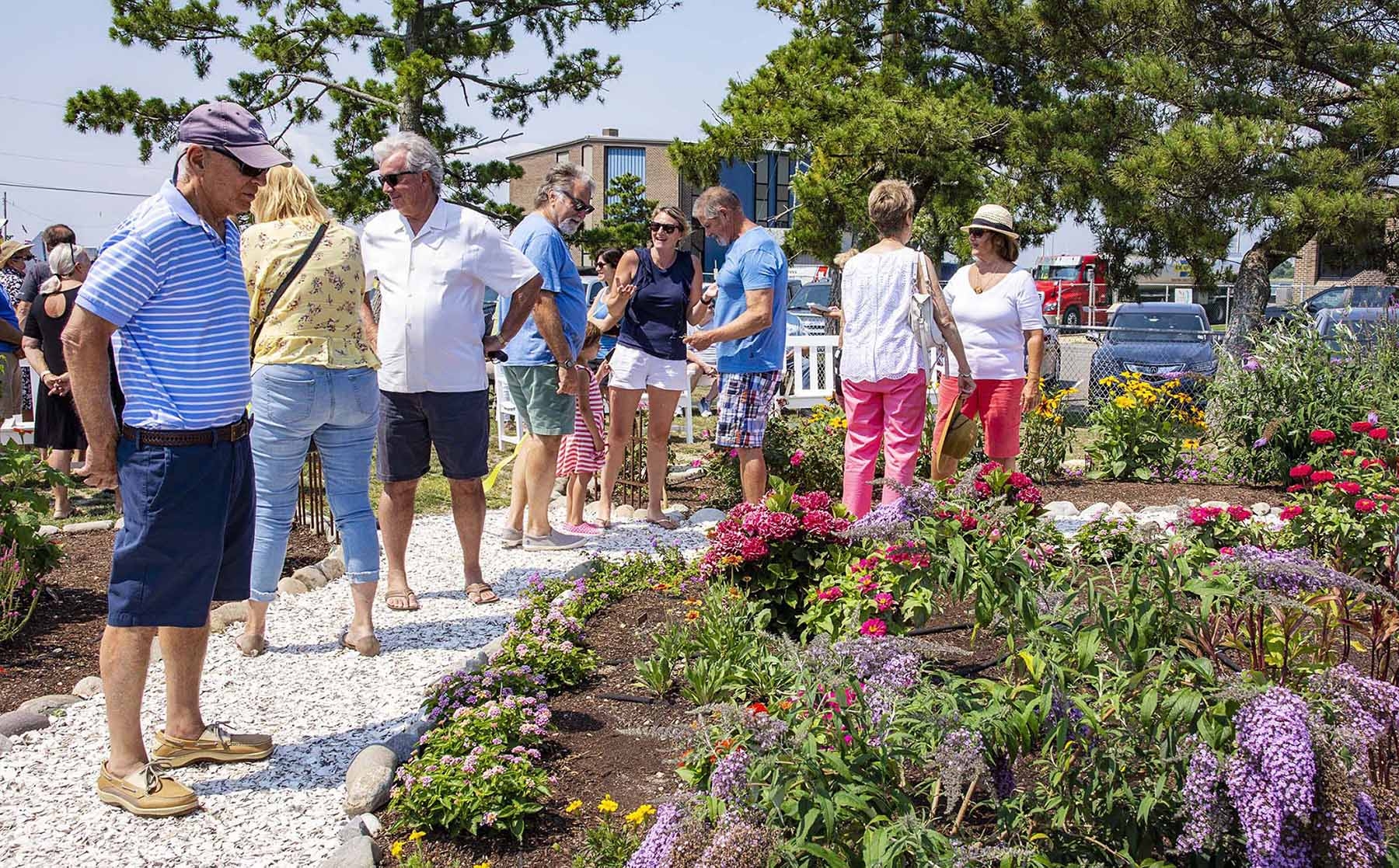 Pollinator Garden – Before and After

“If you build it, they will come”   Kevin Costner

Pollination is the way that flowering plants reproduce. Pollen from the male part of a flower (anther) needs to reach the female part of the flower (stigma) to produce seeds. 75%-95% of flowering plants need help with the process of getting the pollen where it needs to go. Pollinators provide this assistance.

A pollinator is a bee, butterfly, bird, ladybug, dragonfly, or any other creature that visits the inside of a flower. While moving around inside the flower, their bodies collect pollen. The pollen from their bodies is often transferred to the stigma of the flower as they continue to move around, thus achieving pollination.

Pollinators all over the world are in trouble. Their populations are declining year over year everywhere. This is primarily due to loss of habitat caused by human activity. Loss of habitat occurs partly from building homes, roads, and commercial buildings as well as mining, all of which eliminate the wildflowers pollinators feed on. Wide use of herbicides, especially by corporate farms over-spraying their Round Up ready crops from helicopters, has decimated the food sources of pollinators as well. Pesticides kill pollinators. Climate change has disrupted some migration patterns and timing.

A recent article in the New York Times cautioned against straying too far from the traditional purple coneflower (echinacea purpura) if you’re interested in attracting pollinators.  New cultivars in shades of orange, yellow, and red do not produce as much pollen or nectar or seeds as the purple coneflowers do.  They are visited by pollinators less often, too.  The variety with the least value of all to pollinators is the double coneflower.  It has the same problems of less pollen, nectar, and seeds as the other cultivars, but in addition, it lacks the spiny, conical center which gives the flower its name.  Instead, it has a fluffy pad like center which is harder for pollinators to navigate to get to either pollen or nectar or seeds.  These are still beautiful flowers which do no harm to pollinators, but if your purpose is to help pollinators, they are probably the wrong choice for your garden. 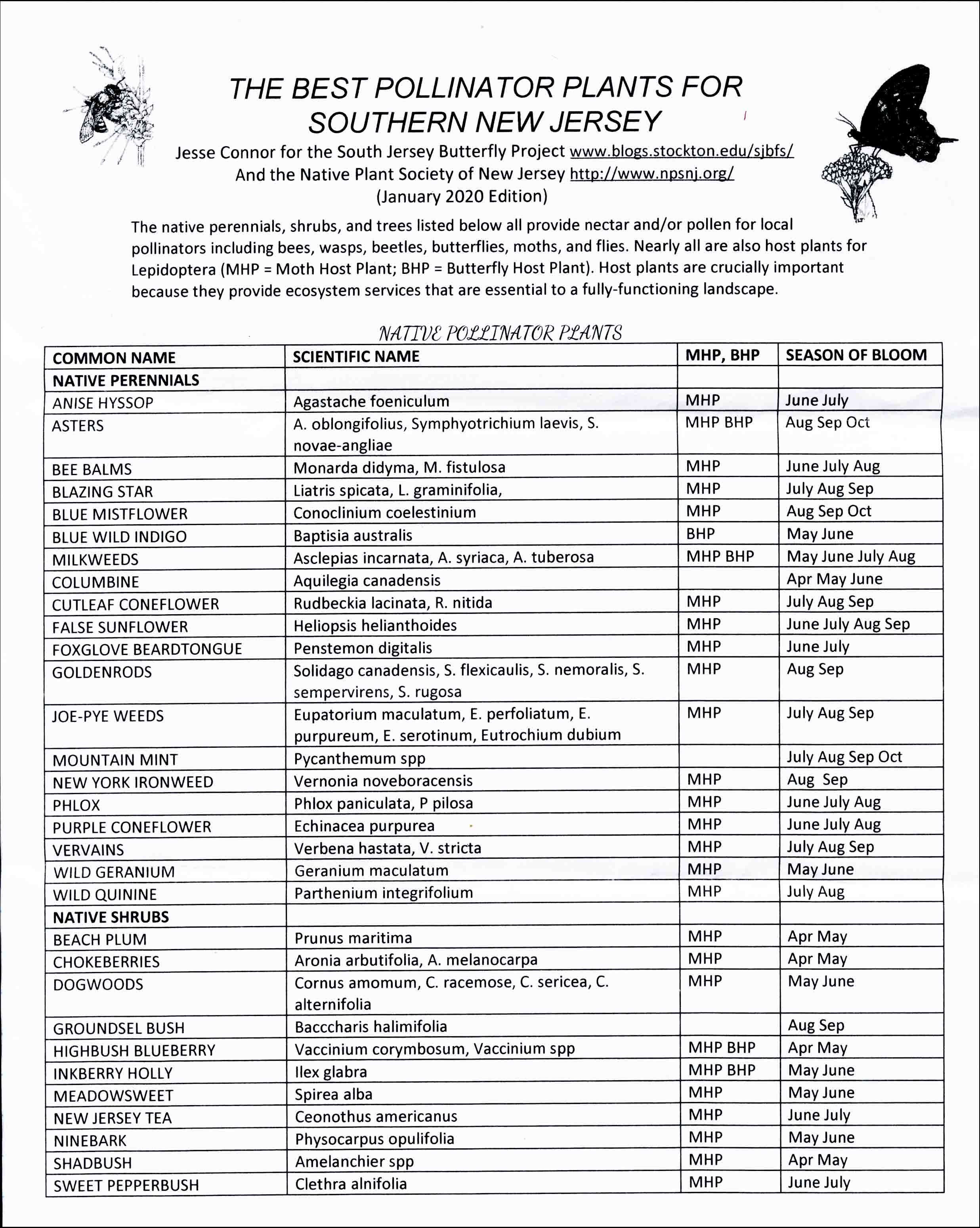 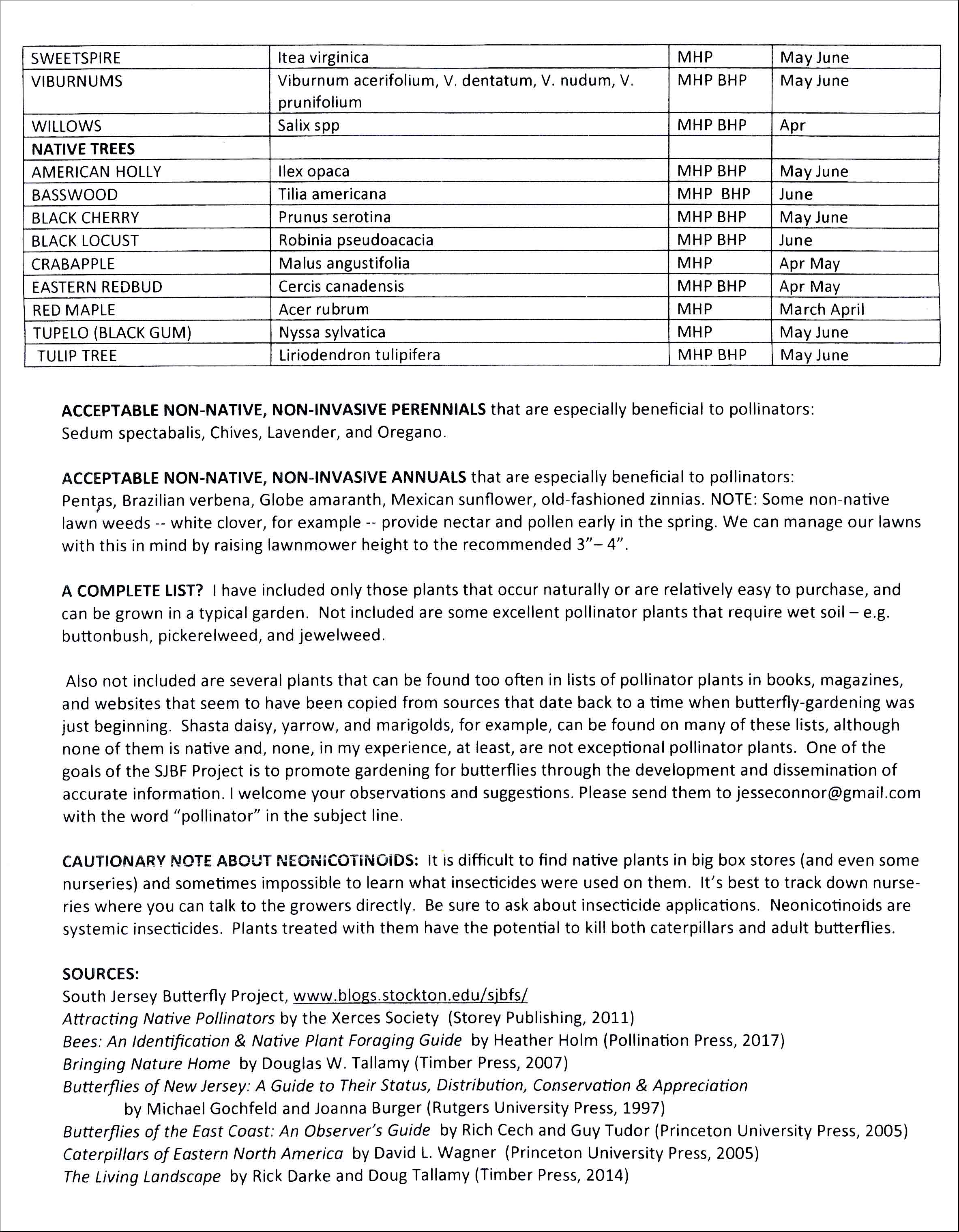